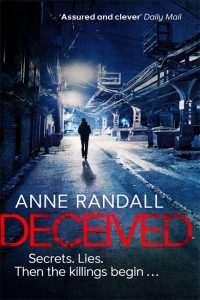 The gritty fourth novel in the award-winning Wheeler and Ross series.

Secrets.
What secrets are hidden at the heart of family life?

Deceit.
The lies we tell ourselves are often more dangerous than the truth.

When forty-one-year-old Sarah Price is reported missing after having arranged a date with a man she met on the internet, her son is distraught.

Meanwhile, Glasgow based Detective Inspectors Kat Wheeler and Steven Ross attend the scene of a murder. Michael O’Donnell, a widower and devoted stay-at-home dad to his daughter, Paula, has been brutally killed. And Paula, who is vulnerable and dependent on daily medication, is missing.

As Wheeler and Ross race to find Michael’s killer and Paula’s abductor, they are drawn into a tangled web of deceit. Soon they come to realise that the killer is watching them. And is always one step ahead…

‘Randall has grown in confidence since her debut, and this is as assured and clever a novel of “tartan noir” as you could hope to find’ – Daily Mail

For fans of Stuart MacBride, this is a delight to read. A J McCreanor is a welcome addition to the Scottish crime scene. Glasgow is in very dangerous hands — Crimesquad

A super story with a breath-taking ending that leaves you wondering whether the truth is better left unsaid at times. I loved this story and am keen to read more by this author in the future. She is definitely a name to watch! Highly recommended — Eurocrime

…fast paced, exciting and gritty crime debut…fans of Ian Rankin and Val McDermid will be delighted to add a new author to the their must-read list — Candis Magazine

Anne Randall was born in Glasgow and after university taught English in various secondary schools in inner Glasgow. In 2011 she won first prize for crime fiction writing at the Wells Literature Festival. Anne now lives in Glastonbury with her husband, two cats and one dog. Anne’s first book in the Wheeler and Ross series, Riven, was written under the name A. J. McCreanor.